Man has gone out to explore other worlds and other civilizations without having explored his own labyrinth of dark passages and secret chambers, and without finding out what lies behind doorways that he himself has sealed. 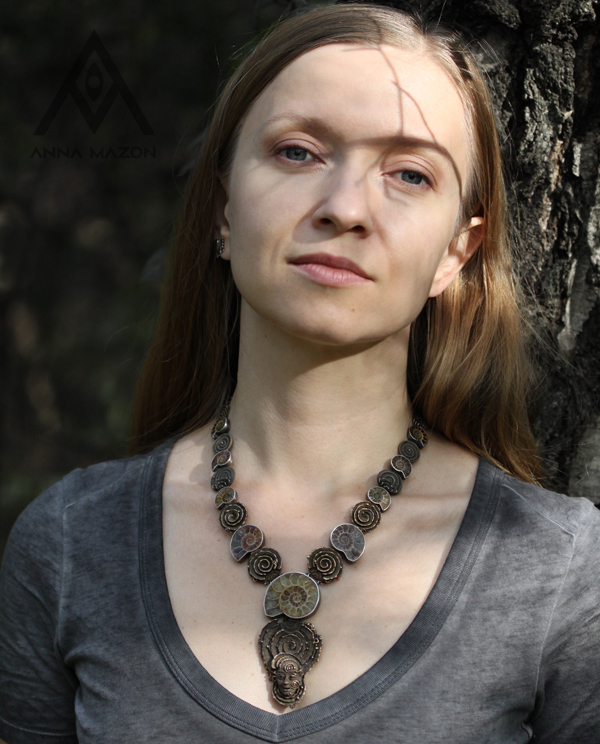 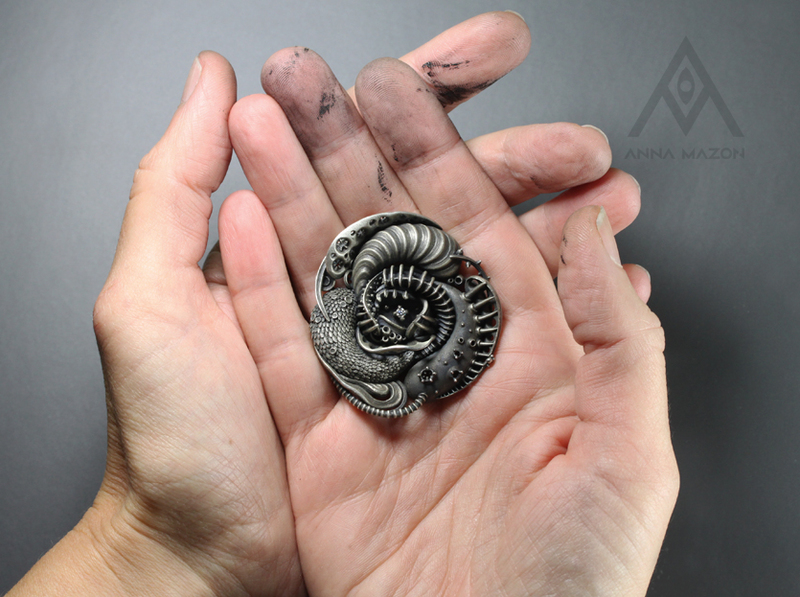 My name is Anna Mazoń and annamazon.com is my second artistic project besides Drakonaria brand. Here I present my most personal creations, often realized in quite dark, eclectic, experimental form. All pieces shown here are one of a kind and made because I just felt a profound need to make them. They always involve intensive, painstaking work, both physical and emotional, careful choice of materials and techniques. This is a place of my personal expression, my little treehouse in the weird garden of reality.

Making sculptural jewellery is for me a way of interacting with the world. I see it as full of unsolved and maybe unsolvable mysteries. Sometimes I think I look for hidden threads of Truth in the fabric of reality. I try to catch them and pull, to check what happens. Sometimes I reach through the mists of half forgotten tales, I mix them with my emotions and intuitions. I also like to give physical form to philosophical, religious or etnographic themes which I love to investigate for months through reading thematic literature and precise planning. Sometimes it happens though, that after weeks of working and holding a ready piece of jewellery in my hand I am left with nothing but more questions. And this is ok too. I give myself time, not only to create, but also to understand what I make. 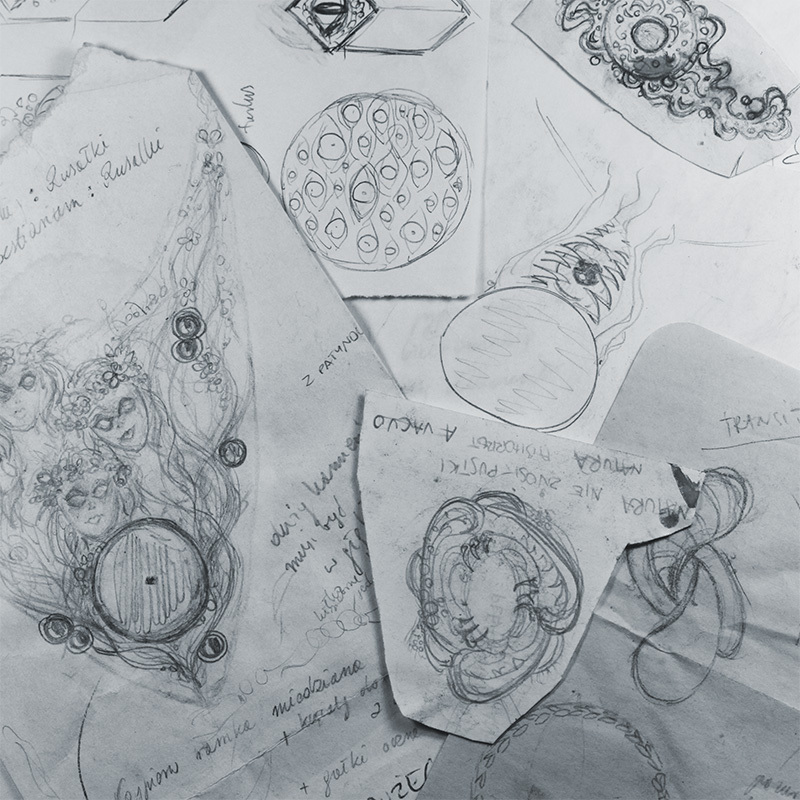 Every creation you see on this website is a true one of a kind piece. Totally unique, made from scratch by hand, without any rush. Quite often the process takes weeks or even months.
My material of choice is silver combined with natural stones, but I believe in predominance of idea over materials and techniques. Sometimes I work with bronze, gold, ceramic clay, glass or such exotic materials as... hornet nests.
From the technical point of view my favourite way or working with metal is so called metal clay technique. It definitely encourages sculptural approach to jewellery. I combine this technique with my traditional metalsmithing skills. In my workshop you can often hear buzz of my gas torch and noise of my sawing blade. But usually the space is filled with complete silence when I sculpt extraordinary, tiny details of my creations.

Every piece of jewellery which leaves my workshop is signed and marked with the year of creation. It comes with a Certificate of Uniqueness and is catalogued. 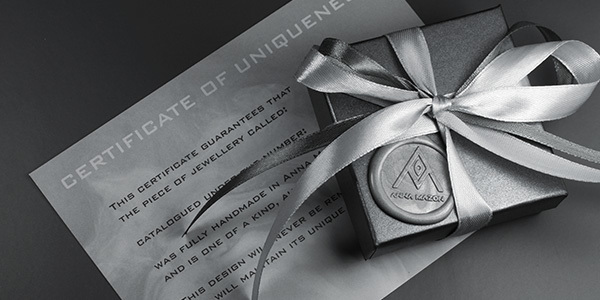 Because of the character of annamazon.com project, in which I focus on exploration of my personal experiences and broadening my creative freedom, I don't make custom orders. Thank you for understanding.

My creations find customers all around the world and their photos are often published on covers of trade magazines, in interviews, thematic articles and books about jewellery. My art has been appreciated in international competitions and has taken part in exhibitions. Since 2013 I also teach metal clay technique internationally in artistic studios of Europe and USA. I also teach, give speeches and presentations during trade conferences in USA and countries of Europe. You can learn more about my teaching in WORKSHOPS section of Drakonaria brand website.

2020 –„Baba Jaga” pendant published in „Panopticum” calendar, along with other 11 interesting names from Polish scene of jewellery making.

2019 – Prelection, workshops and presentation of my work during „Metal Clay Mojo” conference, USA.

2018 – „Moon Gazing” on the cover of British magazine „Making Jewellery, issue 123, along with an interview and story of the project.

2018 – „Natura abhorret a vacuo” published in a book „Narrative Jewelry: Tales from the Toolbox” by Mark Fenn.

2018 – First place in a competition „Stone of the month” by Skarby Natury.

2018 – „In the eye of the beholder 10 – from within” awarded „Daily Deviation” by DeviantART portal.

2018 – Prelection, workshops and exhibition during „You Can Make it” conference, Great Britain.

2018 – Publication of the story of the „Light Bringer” in „Creative Fire” online magazine.

2017 – Prelection, workshops and exhibition during „You Can Make It” conference, Great Britain.

2015 – Photos of bangles "Forest wreaths" published in "Handmade Business", issue March 2015 along with a group interview about the future of metal clays.

2014 – Interview with me and Christi Anderson, as winners of Saul Bell Design Award 2014 in metal clay category, published on "The Studio" blog (Rio Grande).

2014 – Interview with me published in CornerStone, PMC Connection.

2013 – An interview with me published in Metal Clay Academy newslettee Jan/Feb 2013.

2013 - "Sol omnia regit" pendant on the cover of Metal Clay Artist Magazine, vol. 3, #4, along with and interview with me inside.

2012 – In a book byMonika Szwaja, "Mother of all dolls" you can find a „thank you” for me for „jewellery inspirations”.

2012 – Photo of bridal jewellery by me published in Summer issue of Metal Clay Artist Magazine.

2012 – An article about my work published on beModels.pl portal.

2010 - "Quenya – Fëanáro" pendant published in thematic article "In the colour of blood and fire" on Polish Jewellery portal.

2010 – Article about my work on Russian website "Dream Worlds".

2009 – Interview with me published in "Deviance" – zin of DeviantART portal.

2009 - "Awen Inside" pendant awarded "Digart of the day" on Digart.pl portal.