"Baba Yaga" pendant is definitely a collector's item. It is fully hand sculpted in sterling silver and additionally subtly plated with a few colours of gold. Adorned with Baltic ambers and jets (the rotating element in the center of the hut has amber on one side and jet on the other, and there is amber and jet intarsia in three elements on the right side of the pendant). It is oxidized and satin finished to showcase all the intricate details. Only partially polished. Total length of this piece is 9 cm (this includes the hut with a bail hidden behind it and the chicken foot dangling at the bottom). The width in the widest place is 4,2 cm. This piece is not particularly big - precision of this wearable sculpture is really impressive. I invite you to read the full story of this piece below.

Baba Yaga is a fascinating, multidimensional character from Slavic folklore. In some stories she plays a role of a villan, in others, after testing the hero or heroine she awards them with riches or invaluable advice. She is always a liminal character - between culture and nature, feminine and masculine, "ourness" and "foreignness", caring and hostility. Lady of initiation, transgressing through broadly understood borders - to other worlds or new social roles.

Every piece of this pendant comes straight from numerous tales featuring Baba Yaga.
In this wearable sculpture you can see a mortar in which Baba Yaga flies (this might be surprising for those not familiar with Slavic archetype of a witch), a pestle she uses for steering and a broom to sweep her tracks. Pestle and mortar in psychodynamic interpretations are seen as symbols of masculine/feminine. On the left you can find a whole forest - Baba Yaga's dominion (she is sometimes called Lady of the Forest) while on the right you can see a wing (in several tales she is able to control birds). There is a fire of her oven (often interpreted as fire of transformation or initiation) and skulls on stakes (depending on how the hero approaches Baba Yaga his head might end up on one of them). Baba Yaga will gladly take care of the rest of the body (hence sculpted bones) - oral aggression is a very important part of this character.

Mushrooms and herbs are other motifs you can find in this pendant. Baba Yaga grinds them in her mortar and uses them to create various potions. Maybe this is a hint about how "travelling in a mortar" works. Pattern you can see on Baba Yaga's head scarf and the golden coin (sometimes she awards a lucky hero or heroine with riches) is in fact an embroidery motif from Russian Kuban region, signifying Baba Yaga's hut or her temple. Three elements on the right, adorned with two shades of amber and jet symbolize Baba Yaga's warrior servants - the three horseman - Bright Day, Red Sun and Black Night. You can also notice a viper - in several stories vipers and toads are Baba Yaga's children. In a few types of stories she is also interchangeable with a huge snake Żmij or a dragon.

Of course there is also a hut on a chicken foot (or feet). In the center of it you can see a rotating element with amber on one side and jet on the other (this combinaton of materials is considered to be especially magical). This rotating setting is a symbol of a crucial moment of many stories featuring Baba Yaga, when the hero approaches the hut and traditionally says an incantation:

"Hut, hut, turn your eyes to the forest and your front to me" (there are several version of this incantation, but their sense is the same)

Then the hero meets Baba Yaga who traditionally asks:
"Do you come here of your own free will, or do you come by compulsion?” or alternatively:
“Have you come to do deeds, doughty youth, or to flee from deeds?”

The right answer is:  "Mostly of my own free will, and twice as much by compulsion!"

For me this conversation is a symbolic acceptance of the fact that we always have choice, but never 100% control over what is happening. It is also an interesting logical paradox, accepting the weird reality of the fairytale where things don't have to sum up to 100% (mostly and twice as much). If I give the wrong answer I will end badly. If my answer is correct Baba Yaga will help me with what I want to achieve, though not nessecarily in a way I expect. This is what the rotating stone means to me. Usually meetings with Baba Yaga end for the hero with moving to the "next level" - in a social (new social role) or a physical sense (gaining an entrance to the underworld or a different realm). This is why tales featuring Baba Yaga are often interpreted as initiation tales.

I carved traditional texts of the incantation to the hut and the dialogue with Baba Yaga on the back of this pendant (I chose to use Cyrillic to keep the most authentic character of the piece).

This piece comes with a silver chain (the length is up to the Buyer) and a black cord. It will be packed in a gift box. Certificate of uniqueness attached. It is signed and marked with a year of creation (2020). This pendant was published in a calendar "Kunstkamera 2021" - it was a project started by Marta Norenberg who invited 12 jewellery artists from Poland to make something they always wanted to make, but never had enough time. "Baba Yaga" pendant is what I was thinking about for a long time.
If the Buyer wishes so, I will attach a copy of the calendar to the pendant.

Do you want to know more about this product?

I will gladly answer all your questions.

Recently I had a pleasure of taking part in an amazing project called „Cabinet of curiosities”, started and organized by Marta Norenberg. Marta invited twelve fantastic Polish jewellery makers and asked them to let their imagination run wild, forget about the working time, forget about cost of materials and make something they always wanted to make...
read more... 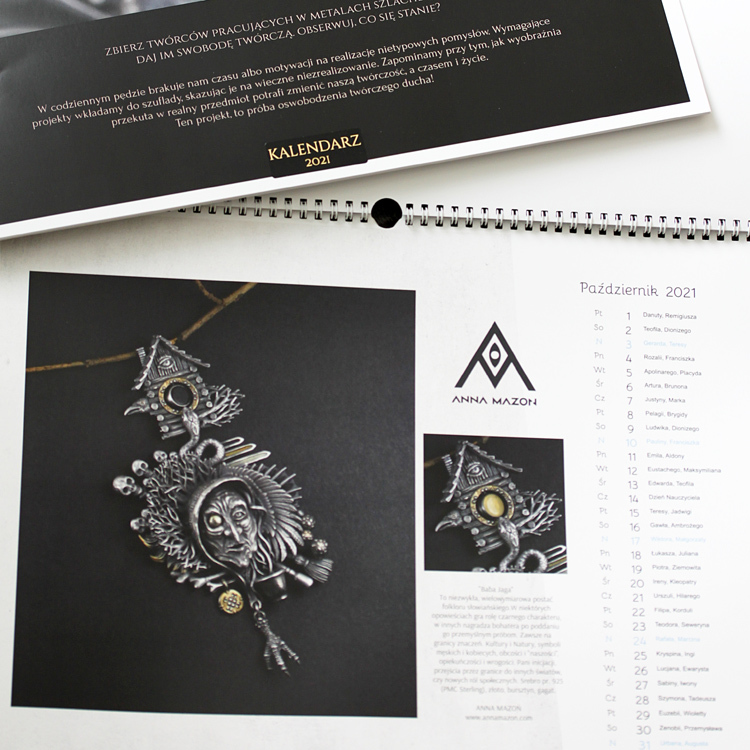 Welcome to my new den of creativity

Today I want to officially welcome everyone to my new website annamazon.com and say a few words about WHO, WHAT, HOW and WHY...
read more... 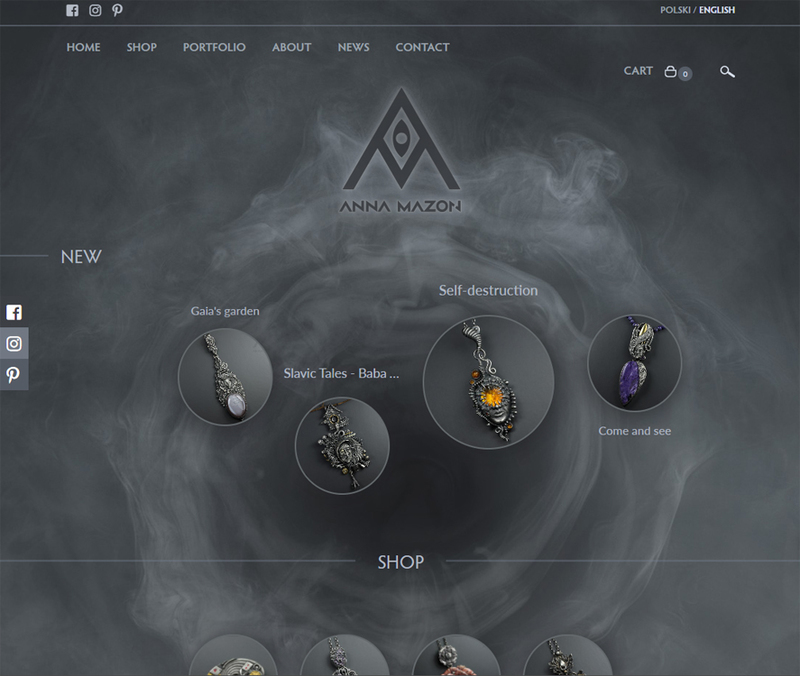 „Lair of visions” in AMCAW calendar

My pendant „Lair of visions” was published in AMCAW calendar (Alliance for Metal Clay Arts Worldwide) for 2021.  This piece is made of sterling silver, milled sterling sheet, fine silver bezel wire, electroplated gold, three labradorites and two peridots. This pendant was hand sculpted using simple tools. No moulds. Every element was formed from scratch. It’s a combination of sculpting in wet clay, slip painting and dry contruction. Stone settings were soldered after firing. The bail was constructed from milled metal, combined with an ornamental element sculpted in metal clay - the elements were soldered together. This piece is a poetic reminiscence of my strolls and meditations in the forest. Forest and its gifts as a source of vision See more photos of this piece here.
read more... 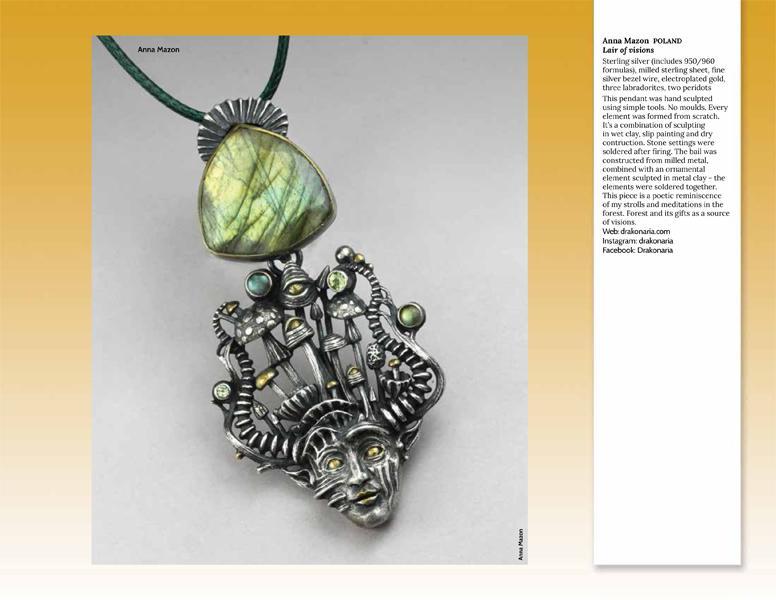 My name is Anna Mazoń and annamazon.com is my second artistic project besides Drakonaria brand. Here I present my most personal creations, often realized in quite dark, eclectic, experimental form. All pieces shown here are one of a kind and made because...